I am nearly done with Deep Carbon Observatory. It's badass. If you haven't checked it out already then you definitely should. It's my favourite DnD module-thing from last year. Also this post probably won't make any sense if you haven't read or played it.

Anyway, halfway to the dungeon there is an excellent dam. It is guarded by some statues that are full of guts called Canoptic Guards. Upon his gruesome murder at the hands of a Canoptic Guard, one of my player's last words were "Cut out my brain, shove it in this thing and see what happens."

The un-paralysed wizard performed a long and ridiculous ritual and I rolled on The DMs Emergency Dodecahedron Outcomes Table with all of the modifiers except for +2 and -2. The ritual was successful.


IF THIS SHOULD HAPPEN TO YOU, THEN PERHAPS THIS INFORMATION WILL BE OF USE

The following was given to the Canoptic Abomination when he was resurrected:

So you came back, but not to your own body.

[Your character] is now a giant stone man with his guts in constant danger of spilling out through the cracks in his armour.

There is an old, insane voice in your head (either the shattered remains of the mind that used to control the statue, or perhaps the voice of the magic itself, you're not sure). The voice is constantly screaming at you about intruders. "INTRUDERS. THEY WILL DEFILE THE OBSERVATORY. CLAW OUT THEIR EYES AND OFFER THEM UP TO THE OPTICAL GOD. INTRUDERS. THEY WILL DEFILE THE OBSERVATORY..."

This voice speaks in an ancient language that you somehow understand. You can now read and write in the language of the dam builders. In fact, it is easier to understand this language than it is for you to understand Common. The voice in your head often seems to make more sense than your old companions do.

You can only see blurry shapes within 30 ft of you. You can, however, sense the presence and exact location of every intelligent, living intruder in the dam, lake and the observatory below the lake.

There is an observatory below the lake.

You remember standing by the Lord Ambotoharanana as he died, and trying not to weep. You also remember hacking off his head, kicking it into a river and stealing his treasures. These memories overlap and blur, and it seems to you almost as though they happened simultaneously. You are vaguely aware that this is impossible, but you can't work out why.

The sword 'Varistor' and the Key are important. They must be protected. The key must never be used. The bureaucrats were entombed in the dam with you and your lord. They will know the uses of Varistor.

Your strength is now 20. This gives you a +4 bonus. There are no rules for this in LotFP exactly, but you are pretty fucking strong.

Your dex and con will need to be re-rolled with 3d6 each.

Your health will need to be re-rolled with 5d8+5x(NewConBonus). It is possible for enemies to do you humongous damage by targeting your organs.

You are a golem, but also not a golem. You are an abomination. You count as undead. You no longer need to sleep, eat or drink. You cannot be healed in the usual ways. You have all undead weaknesses and resistances.

You are not held together properly. Every morning there is a 3% chance that you just die. If you did nothing the previous day and night this chance drops to 1%

There is a golem entombed in the dam with you and your lord. A Liber Unculous. It contains the secrets for turning a man into a golem. Perhaps this knowledge could make you whole. This is not the only way to make a golem, however.

The dam builders are now all dead. Or, more accurately, the golems that housed their soul have all been destroyed. Their names were:
Alnitak
Alnilam
Mintaka
Saiph
Kabibona'kan
Kalevan

Patrick Stuart also mentioned two things that have been implemented to great effect.
To my surprise, my players managed to locate the Liber Unculous. They spent some time reading through the thirty three scrolls of Turbine Golem creation. After a few days of research they found a couple of rituals they planned to horribly misuse in order to try and keep the Canoptic Abomination from dying (the Abomination lied and said they wouldn't be able to get into the observatory without the knowledge of the scroll. Otherwise they never would have wasted all this time. The Crows would later use this malfeasance to sow dissent - to great effect) and a reference to another text, specially for creating Canoptic Guards in the Mountain of One Million Corpses.

I guess if they actually find it I'll have to make up a PC Canoptic Guard class. The Canoptic Abomination is unable to gain levels or XP until then.

In my campaign the Mountain of One Million Corpses is Death Frost Doom. I can't fucking wait to run DFD with the hook being one player's desperate and selfish desire to live. 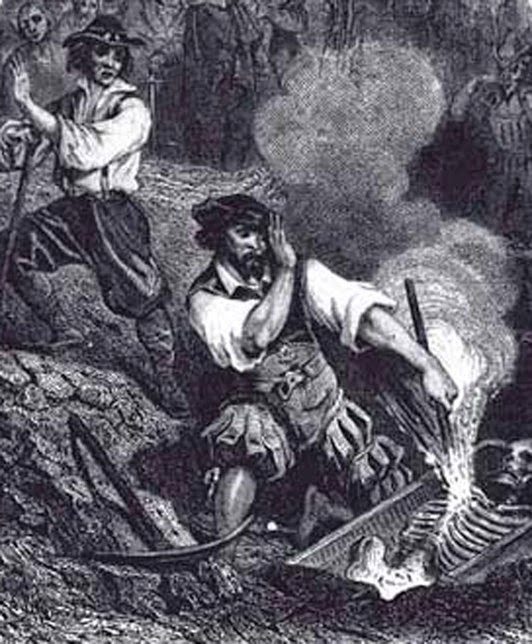