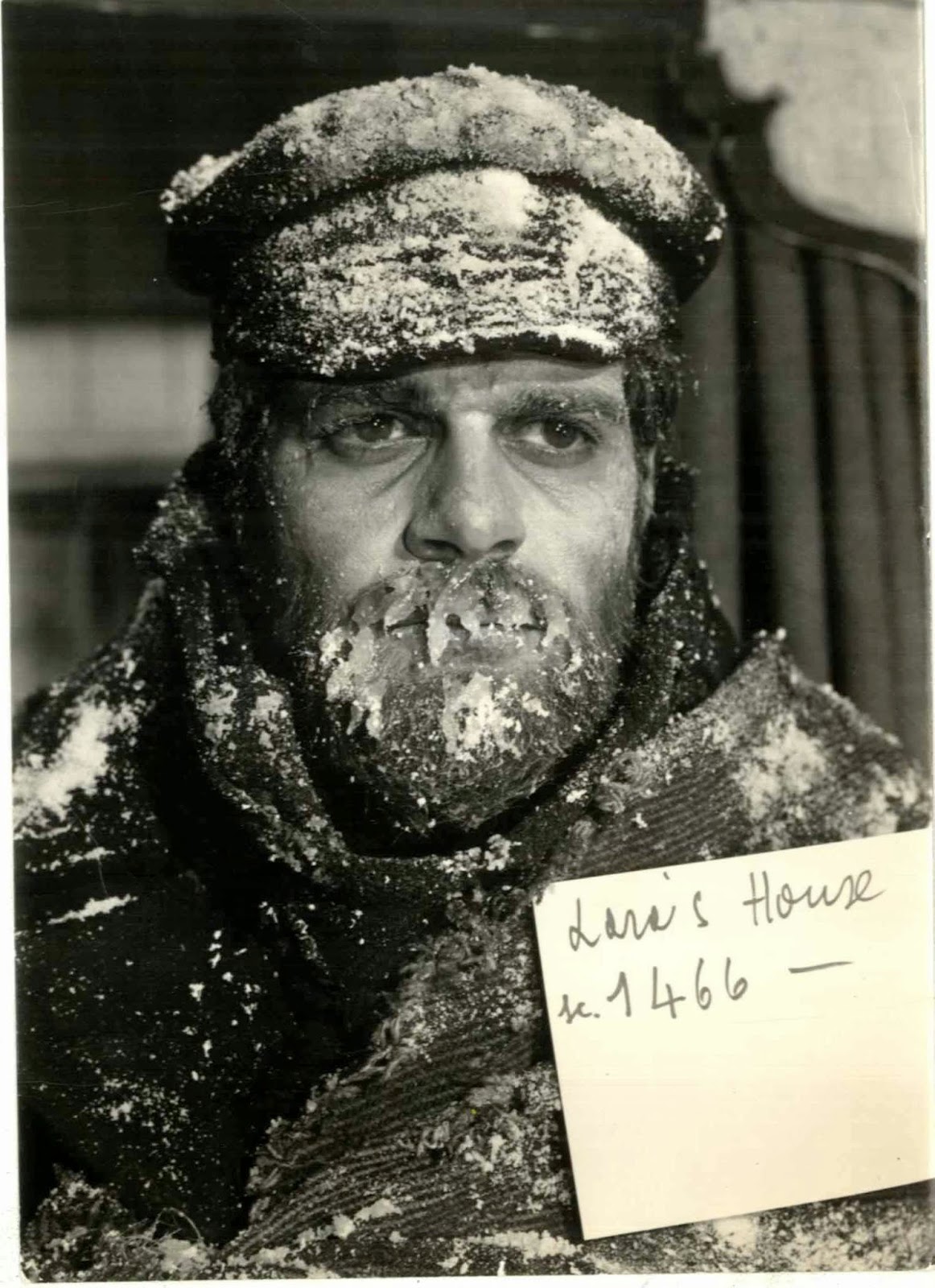 1) "...shrinking against the walls, thin, decently dressed old men and women, who stood like a silent reproach to the passers-by, wordlessly offering what no one needed - artificial flowers, coffee percolators with glass lids and whistles, black net evening dresses and uniforms of offices that had been abolished."
2) "Simpler people traded in more useful things: spiky crusts of stale rationed black bread, damp, dirty chunks of sugar, and the ounce packets of course tobacco cut in half right across the label."
3) " Round the corner, girls and women from villages near-by, hiding behind each other as excited as if they were at the fortune-teller's, stood in single file in the shelter of the station wall, selling cucumbers, cottage cheese, platterfuls of boiled beef and rye pancakes kept hot and savoury in quilted napkins."

NPCs
1) "Pritulyev came from Malmysh. His hair was close-cropped and he was pock-marked, squat and hideous. His grey tunic, black with sweat under the arms, fitted him snugly like a fleshy woman's bodice. He would sit for hours as silent as a graven image, thoughtfully scratching the warts on his hands until they bled and suppurated."
2) "Vassaya was an attractive boy with regular features, who looked like a royal page or an angel in a picture. He was unusually innocent and unspoilt. His favourite occupation was to sit on the floor at the feet of his elders, looking up at them, his hands clasped round his knees, and listen to their talk or to the tales of their adventures. By watching the muscles of his face, as he only just restrained himself from tears or choked with laughter, you could almost follow the conversation."
3) "The door was opened by the master of the house, a polite young man with a pale olive complexion and dark melancholy eyes. He was agitated by a number of things-his wife's illness, the impending search, and his profound reverence for medical science and its representatives." 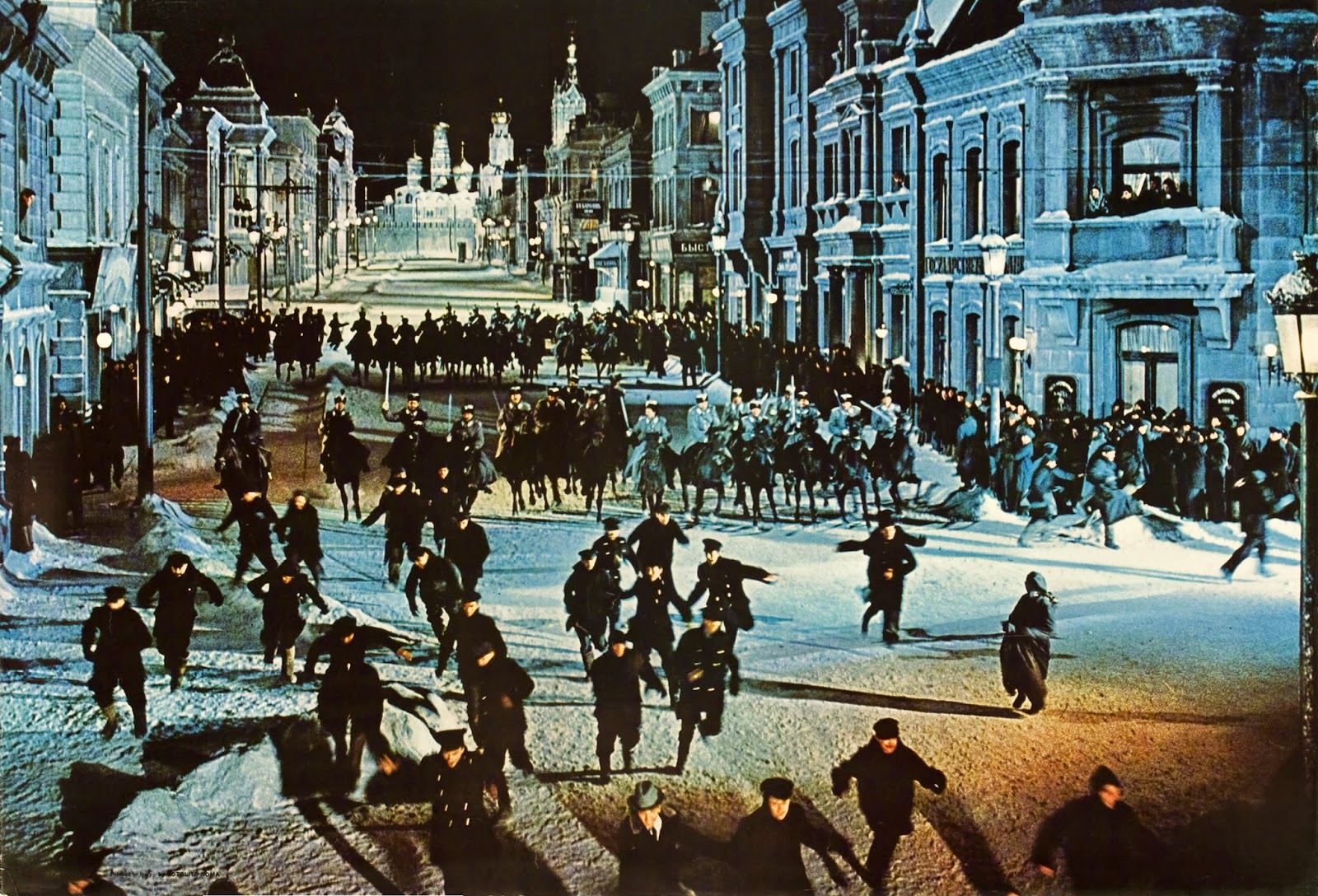 TROUBLE
1) "Everywhere there were new elections: for the running of housing, trade, industry and municipal services. Commissars were being appointed to each, men in black leather jerkins, with unlimited powers and an iron will, armed with means of intimidation and revolvers, who shaved little and slept less.
They knew the slinking [adventurer] breed, the average holder's of [trinkets from beneath the earth] and they spoke to them without the slightest pity and Mephistophelean smiles, as to petty thieves caught in the act."
2) "Don't move, Comrade Doctor." said the cavalryman, who was the eldest of the three. "If you obey orders , you will be perfectly safe. If you don't - no offence meant - we'll shoot you. The surgeon attached to our unit has been killed and we are conscripting you as a medical worker. Get down and hand the reins over to this young man. And let me remind you - if you try to escape we won't stand on ceremony."
3) "We are faced by the rise and spread of a form of psychic illness which is typical of our time and directly caused by the historical circumstances."
4) "You don't know out here what it's like. The whole town is groaning. They boil people alive. They cut strips out of them. They take you by the scruff of the neck and push you inside, you don't know where you are, it's pitch black. You grope about - you are in a cage, inside a railway coach. There are more than forty people in the cage, all in their underclothes. From time to time they open the door and grab whoever comes first - out he goes. They grab you like someone grabs a chicken to cut its throat. I swear to God. Some they hang, some they beat with iron rods, some they question. They beat you to shreds, then put salt on the wounds, they pour boiling water on you. When you vomit or shit, they force you to eat it. As for children, and women, O God!"
5) "Anyone found hoarding food will be shot on sight."

TRAIN ENCOUNTERS
1) Drunken wild eyed man, seeking to be consoled. Keeps being dragged back to his carriage where he is fed more alcohol and bad news by his lawyer. Will commit suicide if not prevented.
2) Solicitor who still practices despite the government's attempts to abolish the old laws.
3) Overconfident Deaf/Mute anarchist noble returning from a hunting trip. Speaks with a strange, forced cadence and mispronounces his "oo"s. Otherwise impossible to tell that he is deaf.
4) City is blown up. If the city the players are travelling to is on this line then it's that city. If they had to change trains, then the train is re-routed to pass right by wherever they wanted to go.
5) Train driver refuses to continue, then flees on foot.
6) Snow on the tracks. "We've had a blizzard for a solid week - snowdrifts all along the line and no one to clear it. Half the village run away. I'll put the rest of them on the job, but it won't be enough."
7) Party member mistaken for wanted criminal.

LOCATIONS
1) "The 'House of Caryatids' was a dark, steel grey building with statues of the Muses holding cymbals, lyres and masks decorating its façade. A merchant had built it in the last century as his private theatre."
2) "Train after train, abandoned by the Whites, stood idle, stopped by the defeat of Kolchak, by running out of fuel and by snowdrifts. Immobilised for good and buried in the snow they stretched almost uninterruptedly for miles on end. Some of them served as fortresses for armed bands of robbers or as hide-outs for escaping criminals or political fugitives - the involuntary vagrants of those days - but most of them were communal mortuaries, mass graves of the victims of the cold and of the typhus raging all along the railway line and mowing down whole villages in its neighbourhood."

GUIDING PHILOSPHY
"Tonya keeps asking if we'll arrive in time to plant our vegetables. I don't know. I don't know the soil or the climate in the Urals; the summer is so short I can't think of how anything ever ripens in time.
"But after all, it is not for the sake of market gardening that we are going all this enormous distance. No, we had better face things honestly, our object is quite different. We are going to try to subsist in the modern fashion, taking our share in the squandering of old Krueger's properties, his factories and machines. We are not going to rebuild his fortune, but, like everyone else and in the same chaotic way, we'll fritter it away and lend a hand in the collective squandering of thousands for the sake of earning a copeck's worth of living. Not that I would take back my estate on the old terms as a gift, not if you gave me my weight in gold. That would be as foolish as to start running about naked or trying to forget the alphabet. No, the age of property in Russia is over, and anyway, we Gromenkos lost our acquisitive passion a generation ago." 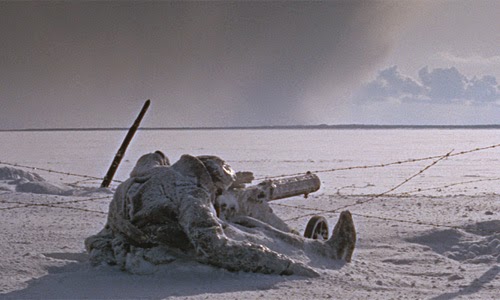