"It would not be easy to believe that the corpses of the dead should sally (I know not by what agency) from their graves, and should wander about to the terror or destruction of the living, and again return to the tomb, which of its own accord spontaneously opened to receive them, did not frequent examples, occurring in our own times, suffice to establish this fact, to the truth of which there is abundant testimony" 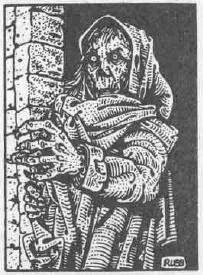 So a player character died. My condolences - my players always take that shit hard. The rest of the party probably couldn't afford to resurrect her and her player probably had another character all ready to go anyway. Maybe they buried her.

About a day's journey from her grave, a charming old man appears. He is offering to sell a scroll of resurrection for ridiculously cheap. (At this point the players may believe that the old man is a crudely shoehorned way for the DM to apologise for killing of a character and bring her back into the game. That's funny.)

The scroll will detect as magical and examination by those knowledgeable in the arcane will confirm that it should indeed summon the dead. However, the scroll does not work. Or, at least, it appears not to. Though after being cast on a corpse it no longer detects as magical.

In d66 days after the scroll is cast, begin questioning the player about the dead character. Where did she grow up? Did her family move around? Did she have any close friends back home? Did she ever go to school? Was she a member of any organisations? What was her hair colour? Eye colour? What tailors did she favour? Who would she have liked to have been, had she lived? Explain nothing. When the player runs out of biographical details, the dead character will finally seek out her old party and kill them one by one until she is saved.

Let's talk about summoning a revenant.


A Christian burial, indeed, he received, though unworthy of it; but it did not much benefit him: for issuing, by the handiwork of Satan, from his grave at night-time, and pursued by a pack of dogs with horrible barkings, he wandered through the courts and around the houses while all men made fast their doors, and did not dare to go abroad on any errand whatever from the beginning of the night until the sunrise, for fear of meeting and being beaten black and blue by this vagrant monster.

So, someone who just happened to look like the character would offer a 2% chance, while similar looking family members would be 4%. Someone the character adventured with, and who was the same class and friends with the character, who slept under the same roof for years, and shared their food and loot with the revenant is getting up to 10%+. Add or subtract modifiers as you feel. 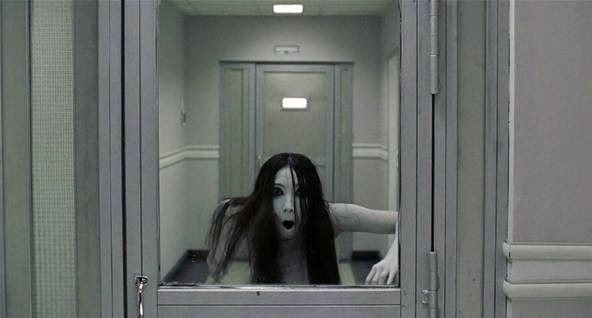 The revenant is initially born with all the skills, levels, and experience it had in life. It has double hp, takes double damage from bone crushing weapons and has all the other usual undead immunities and weaknesses. If it was a Paladin then it is now an Anti-Paladin. If it was a Cleric then it can now turn the living.

Additionally, if it was given a proper burial, then it will be compelled to return to its grave every morning. If it was just thrown into a shallow ditch and covered over with loam then it will have no such compulsion. The revenant gains XP for gold collected (including re-obtaining treasure that it already gained XP from in life). If it has a grave then it will stash its treasures there. If not then its hoard will be much more difficult to find.


"Dig up the body and cut off the head with a spade, sprinkle it with holy water and re-inter it" - Might as well take the heart too, to be safe. And those rings. 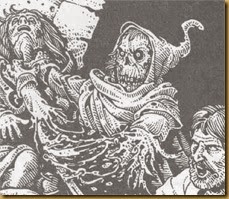 The revenant wants to be free. It will do anything it can to prevent its return to hell. It knows that everyone it kills goes to hell, and this bothers it, but not enough to make it stop. It also knows that the more similar to itself a lving human is, the more likely they are to be accepted in its place.

Unclouded by the commotion of life, it has a perfect memory of everything that happened to it while it was alive, and is easily capable of working out who's death it most likely to give it its freedom. This list probably includes most of its old adventuring party. However, the revenant also knows that if it is destroyed then it will be trapped back in hell forever. It cannot bear this thought, and will avoid the party and all other figures of power until it has no other option.

Before this time, it will kill its family, its old guildhall colleagues, and anyone else whose death might release it. Most "off screen" murders will be at about 2% or 4% chance. Roll each time.  If it is released and the party is left with a near-unsolvable murder spree then so be it.

It will also seek easy treasure in order to level itself up as quickly and cheaply as it can. To this end it will raid the party's fortresses and strongholds when it knows them to be absent, and reclaim all of its old riches (as well as everyone elses), killing all those that it new best in life along the way. It remembers all the weak points and all the passwords. Guards that have not been forewarned and magical protections that have not been recalibrated will simply let it in.

It appears to be human, and is (for the most part) completely rational. It has no vampire/werewolf style blood lust. It is just of the entirely reasonable opinion that it is better to sacrifice anyone and everyone than to be forced to return to hell for the rest of eternity.

If it feels it can indulge in any unfulfilled business or favourite vices without overly compromising its mission then it will do so. 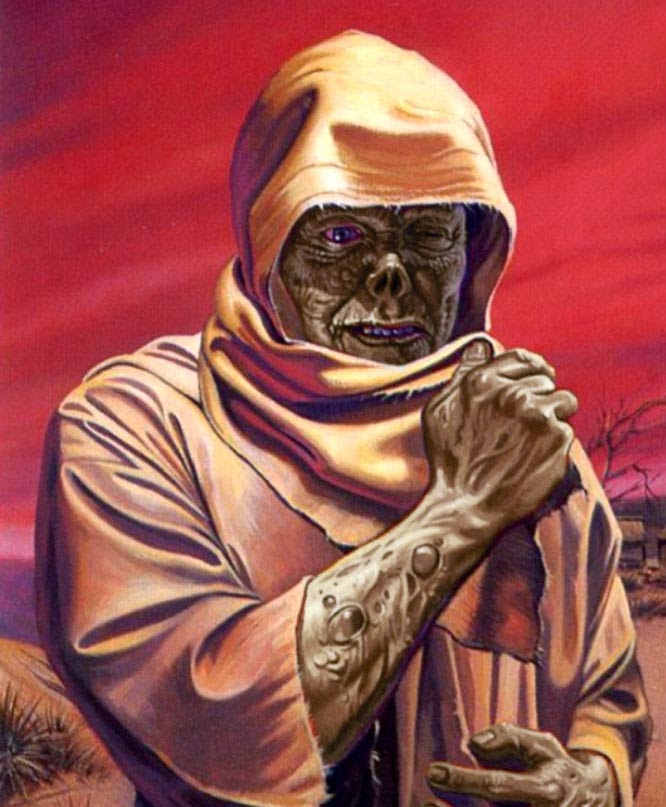 If the revenant has managed to kill most everyone else that ever had a connection with it (as well as perhaps a phonebook style murder spree of everyone nearby with the same name or class) and still not been freed then it will begin to hunt the party. It will be wary of them and conscious of all of their tactics and talents. It will refrain from engaging them directly as best it can, but will attempt to deliver the killing blow itself beyond all else, lest it be denied its chance at freedom.

Lastly, the activities of a revenant near a grave site will give the corpses buried in it ideas. The longer a revenant is active in an area the more copycat revenants will appear, pursuing agendas of their own.


P.S. The Wikipedia page for Revenant is short but bad ass. It is way weirder than both what I've included here and the usual trappings of the undead in fantasy.
Posted by Robin Z at 8:08 PM

Email ThisBlogThis!Share to TwitterShare to FacebookShare to Pinterest
Labels: adventure, the dead